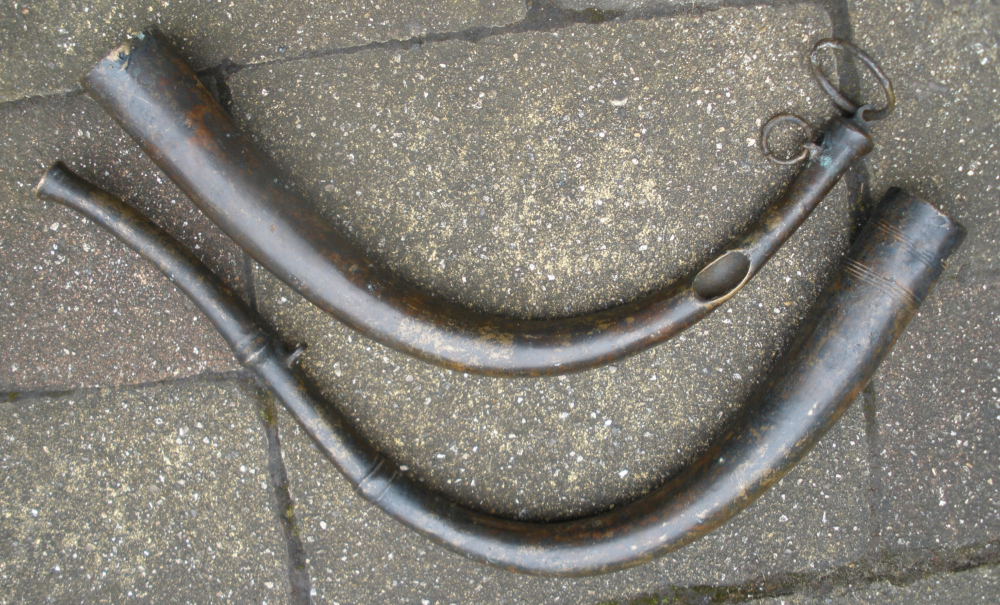 One of the highlights of the Bronze-Age brass is the Irish Horns, over one hundred instruments which were found all over Ireland. They’ve been turning up for over a hundred years, popping up out of bogs unexpectedly. None have been dug up in organised excavations so we know little about their dating other than that they’re from the late Bronze Age.

What is special about them is that they were made in pairs and a number of these matched instruments have been found together. Matched they may be, these horns, but a pair consists of two very-different instruments. One of the pair is end-blown, like a modern trumpet, cornet, trombone, tuba or w.h.y. while the other is side-blown, i.e. blown through a hole in its side wall.

The instruments are cast in bronze and close examination of these shows that an enormous amount of effort and inspiration went into their manufacture. Overall, more expertise was demonstrated by foundrymen who made these than by the craftsmen who made other objects in late Bronze-Age ireland.

The other notable feature of these instruments is that they lack anything like a modern mouthpiece and some have a well-designed lip cushion at their blowing end. When blown conventionally, they produce only one note. In the 1970s, I worked out and demonstrated that, by blowing them as a variable tone colour instrument, i.e., in the manner of a didgeridoo, they became a beautiful instrument. Musicians like Simon O’Dwyer in Ireland built on this idea and now get these instruments to sing like angels.

You will realise, of course, that even though they perform so beautifully in this mode (and they do indeed) this is no proof that it’s the way they were played in the past.

Image: Reproductions of the Pair of Drumbest Horns