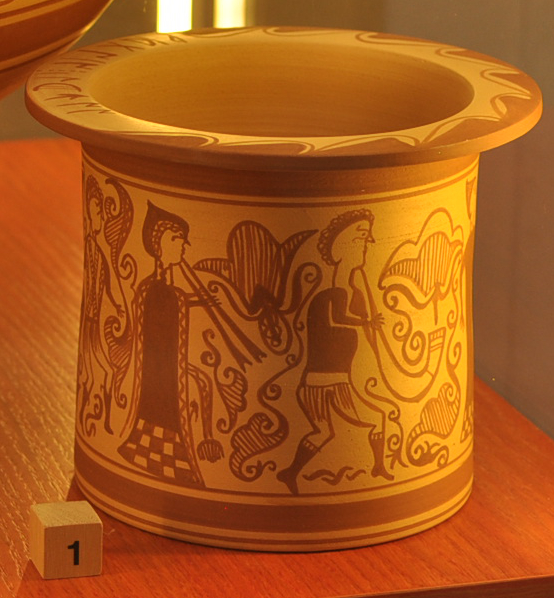 Although instruments throughout the Iron-Age world differed, there was considerable similarity both in instrument form and usage. This was not so in the Celto-Iberian cultural area.

Although no actual instruments have survived, the iconography tells a compelling story. The brass instruments used were long, very conical ones, like in the image above and, like that image, many were represented on pottery. While these instruments might bear a little resemblance to the Etruscan litui of somewhat earlier, unlike the litui, they were conical over a much larger proportion of their length.

Like most of the brass instruments of Iron-Age Europe and the Middle East, the Celto-Iberian brass were played by men. However, uniquely, these men frequently played alongside aulos players, who were frequently women. This combination of brass and woodwind playing together is not at all normal for this period and is, indeed, very rare. The two instruments are seen together accompanying males and females dancing together and holding hands in public. This was uncommon enough in the Iron-Age world for the Greek Geographer, Strabo, to comment upon the ‘promiscuous’ practice.